What’s The MOST POWERFUL thing in the WORLD? I’ll tell you…

I usually get people’s attention when I type this word “ TWITTER.” Followed by the caption- “What’s The most Powerful thing in the World.”

Experts in the advertising world are saying that this form of Social Media is exploding and Twitter itself, at this moment, is ranked #11 in the world of most hit websites. Twitter disclosed earlier this week that twitter.com currently has 105 million registered users, 180 million unique visitors, and handles 800 million search queries per day. Mind you this company started in 2006! That is incredible growth! In the same amount of time it took your son and/or daughter to enroll in collage as a freshmen and graduate, the three founders of twitter.com became multi-millionaires!

THE POWER OF YOU

Ladies and Gentleman, the most powerful thing in the world is (DRUM ROLL)

“an IDEA … an idea that comes from YOU.”

This is where some of you may “sigh.” And say, “Coach Ron, come on… GOD??! The ECONOMY – the GOVERNMENT??!” Let’s get down to the nitty gritty here. If people don’t pray – God’s not going to MAKE you do anything against your human will. (Trust me on this – I asked Him for years)

THE ECONOMY “Coach Ron, do you know how many people were forced to stop working because of the powerful force of the economy?”  I sure do … just ask the Twitter founders if the economy hit them. We’re not negating God, the Economy, or the Governments power.

In fact, in my heart and mind – God is King! But the MOST POWERFUL thing in the world is to circulate and use the gifts you have been given to CREATE, DREAM, and implement IDEAS. (Hear the spirit in which I’m writing to you) Coupled with the help of prayer, the good hardworking consumers of America, and a government YOU can do something so powerful it completely changes your life and the millions of those around you! YOU HAVE THE POWER!

Here’s a free idea for someone- “How can you help someone else today?” Here’s another IDEA – PRAY for ONE! PRAY FOR AN IDEA!

“Passion is the power that creates life and brings you to your ultimate cause.”- Ron Kardashian.

Send me your thoughts this week to my e-mail and one of you will win a FREE coaching session. Who knows, you could be singing in a few months…”Rocking Robin…Tweet, tweet..:”  I know I will be and I want you singing along with me:) 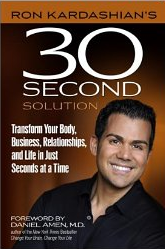 ← VALUE will Drive you to Success IN SECONDS! #30SecSolution
LOVE 101: 3 powerful insights that contribute to inner peace and BIG SUCCESS. →